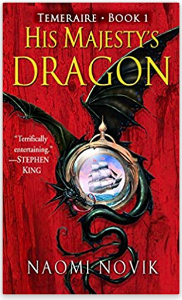 I just got done reading His Majesty’s Dragon by Naomi Novik.

This is a novel about the Napoleonic Wars, but with England and France also fighting it out with dragons, in the most steampunk way you can imagine.

The most fun part of this novel is the recreation of Evelina and Jane Austen manners and etiquette. Here is a scene that shows the best aspects of the novel. The background is that Will was a ship Captain and much admired, but they captured an egg and when the dragon was born, it bonded with Will. As England is desperate for more dragons to stave off Napoleon’s invasion, Will understands that he will now have to resign his post in the Navy, and instead accept a post in the Aviation branch, which is held in contempt by polite society. On his way north to the training grounds in Scotland, he stops by his house, where his father lashes out at him with contempt, for having so mis-managed his career. After that, Will finds himself in the room with Edith, a woman who he had for many years assumed he was going to marry, but he assumes his chances of marriage have been damaged, as Aviators need to live away from polite society, as their dragons are too much of a danger to the public (mostly in that the dragons will eat any sheep or horses that they can).

“Thank you,” he said, the only possible reply, and took the seat next to her; she poured coffee for him and added half a spoonful of sugar and cream each, exactly to his tastes. They sat stiffly together, neither eating nor speaking, until the servants finished the preparations and left the room.

“I hoped I might have a chance to speak with you before you left,” she said quietly, looking at him at last. “I am so very sorry, Will; I suppose there was no alternative?”

He needed a moment to understand she meant his going into harness; despite his anxieties on the subject of his training, he had already forgotten to view his new situation as an evil. “No, my duty was clear,” he said shortly; he might have to tolerate criticism from his father on the subject, but he would not accept it from any other quarter.

But in the event, Edith only nodded. “I knew as soon as I heard that it would be something of the sort,” she said. She bowed her head again; her hands, which had been twisting restlessly over each other, sullied.

“My feelings have not altered with my circumstances,” Laurence said at last, when it was clear she would say nothing more. He felt he already had received his answer, by her lack of warmth, but she would not say, later on, that he had not been true to his word; he would let her be the one to put an end to their understanding. “If yours have, you need merely say a word to silence me.” Even as he made the offer, he could not help but feel resentment, and he could hear an unaccustomed coldness creeping into his voice; a strange tone for a proposal.

She drew a quick, startled breath, and said almost fiercely, “How can you speak so?” For a moment he hoped again; but she went on at once to say, “Have I ever been mercenary; have I ever reproached you for following your chosen course, with all its attendant dangers and discomforts? If you had gone into the Church, you would certainly have had any number of good livings settled upon you; by now we could have been comfortable together in our own home, with children, and I should not have had to spend so many hours in fear for you away at sea.”

She spoke very fast, with more emotion than he was used to seeing in her, and spots of color standing high on her cheeks. There was a great deal of justice in her remarks; he could not fail to see it, and be embarrassed at his own resentment. He half-reached out his hand to her, but she was already continuing: “I have not complained, have I? I have waited; I have been patient; but I have been waiting for something better that a solitary life, far from the society of all my friends and family, with only a very little share of your attention. My feelings are just as they have always been, but I am not so reckless or sentimental as to rely on feeling alone to ensure happiness in the face of every possible obstacle.”

Here at last she stopped. “Forgive me,” Laurence said, heavy with mortification: every word seemed a just reproach, when he had been pleased to think himself ill-used. “I should not have spoken, Edith; I had better have asked your pardon for having placed you in so wretched a position.” He rose from the table and bowed; of course he could not stay in her company now. “I must beg you to excuse me; pray accept all my best wishes for your happiness.”

Purely in terms of writing, there was a lot to like. As a minor point, I enjoyed the heavy use of semi-colons, there are more in this book than in the last 20 books that I’ve read, combined.

There is a lot here that sounds like Evelina, which is one of my favorite novels. Evelina is also a novel that Jane Austen read when she was a teenager, and the influence it had on her is obvious.

The best drama in the book comes from this recreation of the manners and etiquette of the Napoleonic era — all of which is very well done. Many of the scenes with the dragons are actually less dramatic than this.

The culture of the captain and crew, on board a dragon, is meant to, in some ways, mimic the culture of crews aboard a ship. This was a remarkable attempt at taking something from outside of our world and normalizing it as a part of our world.

There were a few things in the novel that irritated me:

1.) At one point it is said the dragons can fly at about 30 miles per hour, the speed of reasonably fast birds but then when the dragons need to fly from north England to southern Spain (1,200 miles, therefore 40 hours) we are told the trip takes 2 weeks. Um, what? Assuming the dragons need to rest 12 hours a day, they’d still get to Spain in 4 days. Perhaps there is an explanation, perhaps they had to take a roundabout route, but that should have been explained. A ship could make the journey in 3 or 4 days, so it is strange that the dragons are so much slower than a ship.

2.) Many of the descriptions of the crew maneuvering around their dragon was difficult to visualize and therefore difficult to follow. This part of the action did not feel like drama to me, because I wasn’t able to follow it.

3.) None of the dragons had strong personalities. I was never sure of their motivation. Will and his dragon, Temeraire, develop a relationship that at times sounds like a romantic attachment — Temeraire becomes jealous of other dragons and insists that Will belongs to Temeraire alone. Still, there wasn’t much else. I’ve read novels about horses where the personalities of the horses were more clearly defined than these dragons. I should emphasize, this book can be read as the coming of age story of Temeraire, so the lack of a strong personality does rob the book of something.

Still, it is a very fun read.

This kind of creative mix of diverse elements (Jane Austen and dragons) is the kind of thing that’s become more common as fanfiction has become something more widespread. I don’t think “accepted” is the right word. More robust, better supported. I was interested in her Acknowledgements page:

I owe thanks first and foremost to the group of beta readers who saw His Majesty’s Dragon through to completion, from the very first chapter to the last, and who gave me not only enthusiastic audience to write for but enormous quantities of excellent advice: Holly Benton, Dana Dupont, Doris gan, Diana Fox, Laura Kanis, Shelly Mitchell, L. Salom, Micole Sudberg and Rebecca Tushnet; and to Francesca Coppa, for telling me to do it in the first place. Thanks also to Sara Rosenbaum and everyone else on livejournal who contributed title suggestions.

I’m assuming that’s the Rebecca Tushnet who is known for her work around fanfiction. She is the sister of Eve Tushnet, whose blog I used to read. It sounds like the author keeps good company.

The suggested workflow seems like the ideal one for producing a novel: a large number of beta readers who help focus the book. I followed the same pattern with my own recent book.