Part of the Great Stagnation is simply a lack of power

Literally, a lack of electricity: 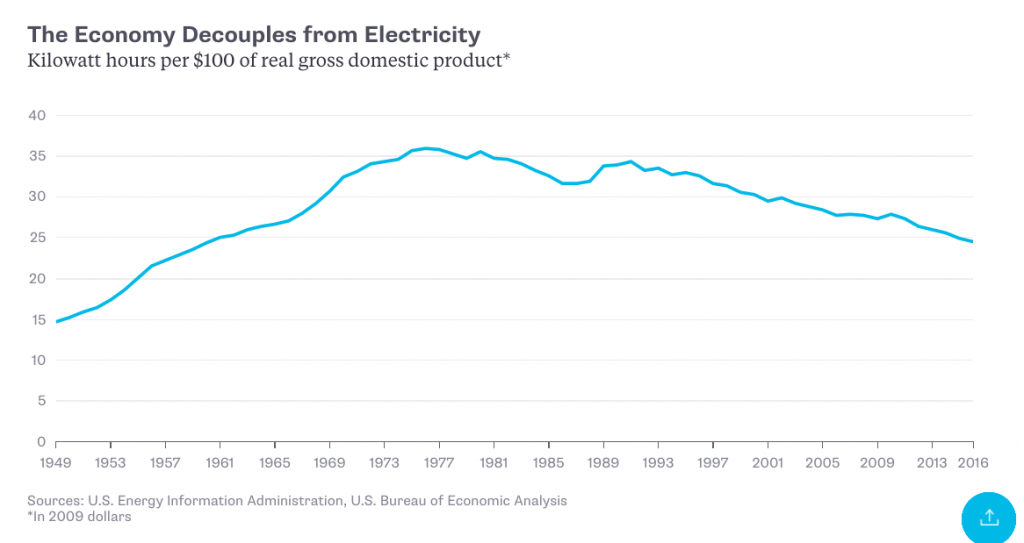 In an article published in the Electricity Journal in 2015, former Lawrence Berkeley energy researcher Jonathan G. Koomey, now a consultant and a lecturer at Stanford, and Virginia Tech historian of science Richard F. Hirsch offered five hypotheses for why electricity demand had decoupled from economic growth (which I’ve paraphrased here):

State and federal efficiency standards for buildings and appliances have enabled us to get by with less electricity.
Increased use of information and communications technologies have also allowed people to conduct business and communicate more efficiently.
Higher prices for electricity in some areas have depressed its use.
Structural changes in the economy have reduced demand.
Electricity use is being underestimated because of the lack of reliable data on how much energy is being produced by rooftop solar panels.
The Energy Information Administration actually started estimating power generation from small-scale solar installations at the end of 2015, after Koomey and Hirsch’s paper came out, and found that it accounted for only about 1 percent of U.S. electricity. That estimate could be off, and there’s surely room for more study, but mismeasurement of solar generation doesn’t seem to be the main explanation here.


I am under the influence of E. F. Schumacher, who suggested that energy was special because it was the starting point of all economic activity.