The rich get richer 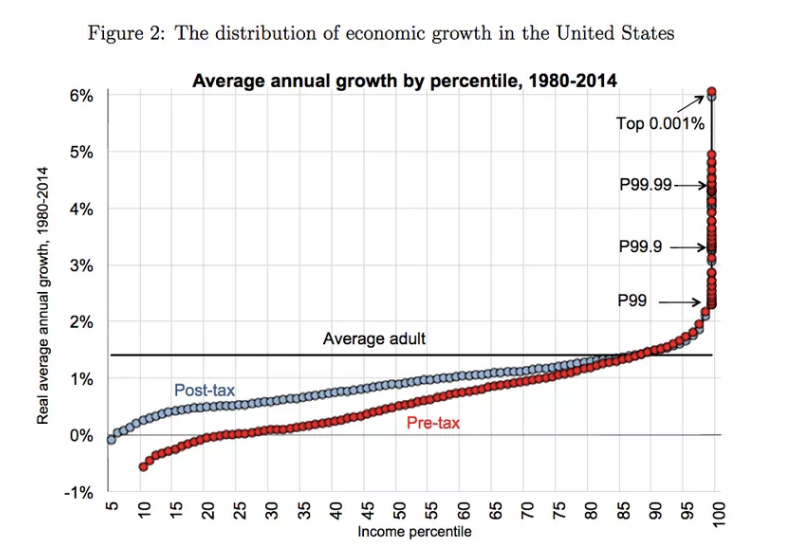 This is not just another chart. The data it uses directly answers conservative attempts to claim that middle-class incomes really have grown substantially, and that the rich aren’t taking all the economic gains. The conservatives argued that the standard data used to illustrate inequality is incomplete; Saez, Piketty, and Zucman have completed it, and demonstrated that income growth has been quite low for the middle class and very unequally distributed between them and the wealthy.

The background context for the new research is that a growing number of conservative economists and policy analysts, most notably Cornell’s Richard Burkhauser and the Joint Economic Committee’s Scott Winship, have argued that even though the data is right, the takeaway message (that the middle class has barely benefited since the 1970s, or that it’s gained a lot less than it should given productivity growth) is false.

Conservatives argue that the numbers are wrong for a variety of reasons and don’t include stuff like government transfers, to which the article says:

When you put those factors together, the conservatives’ contention is things aren’t all that bad — the standard of living of middle-class families has grown quite a bit from the 1970s to the present.

Most liberals and leftists concerned with inequality have argued with this not by disputing the underlying numbers but by pointing out that it’s a rather odd conservative defense of the way the economy works.

“So the argument (of the right) has to be: cash market income of the bottom 99 percent of adults has stagnated but the bottom 99 percent get much more expensive private and government provided health care benefits, some more government transfers, and they have fewer kids,” Saez, who pioneered the use of tax data to study inequality, told the New York Times’s Thomas Edsall in 2012. “This does not seem like a great situation, especially from a conservative point of view.”