After 1968 France and the USA went in different directions

I had no idea the history was so opposite: 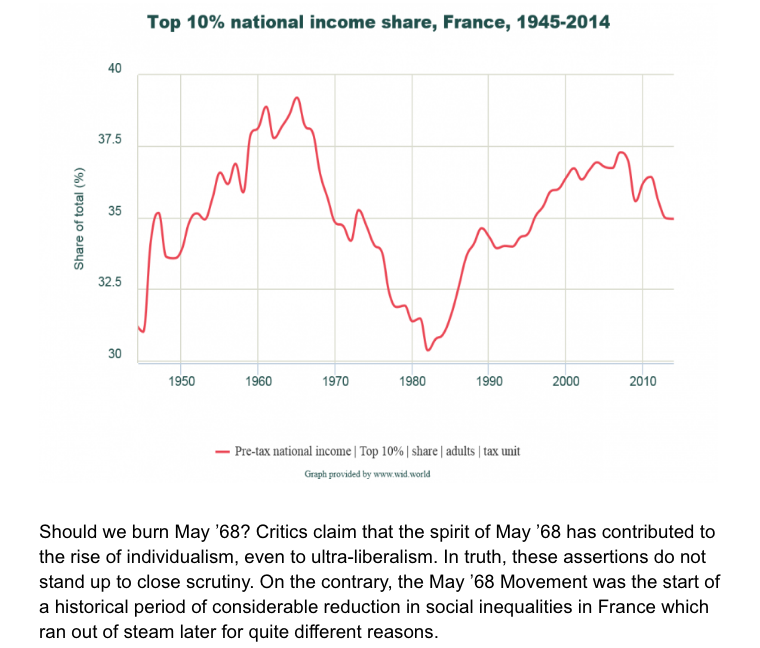 In this new context, the salaries of executives and engineers rose structurally faster than the low and medium-range salaries in the 1950s-1960s and at first, nobody seemed to be worried. A minimum wage had been created in 1950, but it was almost never re-valued thereafter, with the result that there was a wide gap in comparison with the evolution of the average wage. Society had never been so patriarchal; in the 1980s, 80% of the total payroll was paid to men. Women were entrusted with numerous tasks (in particular childcare and the provision of tender loving care in the industrial era) but the control of the wallet was clearly not one their domain. Society was also massively geared towards production; the 40-hour week, promised in 1936, still did not apply because the trade unions had accepted to work a maximum number of hours overtime to accelerate for the country’s economic recovery.

And this is disappointing:

The movement reversed again in 1982-1983. The new socialist government, originating in the May 1981 elections, would doubtless have liked to continue in this direction indefinitely. Unfortunately for them, social movements had already imposed the major catch-up of low wages on right-wing governments thus beating electoral democracy to the post. To prolong the movement of reduction in inequalities, it would have been necessary to invent other tools. Real powers for employees in firms, wide-ranging investment and equality in education, the implementation of a universal system of health insurance and retirement, the development of a social and fiscal Europe. Instead, the government used Europe as a scapegoat when it resorted to austerity in 1983, although Europe was in no way responsible for blocking wage rises: the minimum wage cannot go on rising three times more than production for ever, whether the economy be open or closed.