Bringing up your own pain endlessly is emotionally fraught work

The recent revival of progressive movements, after 50 years of dormancy, have also revived the reality of the progressive movement having fractures. The one that I knew nothing about, until this last year, was the fracture within the LGBQT community; in particular, the conflict between lesbians and transexuals. This is a subject I’m still learning about.

honestly we need to stop engaging in good faith with people who have no respect for the suffering that lesbians have historically gone through/are currently going through in many parts of the world.

someone brings up “genital preferences”? Says shit like “I guess you can have your preference but it’s still kinda weird and gross :/ :/”

don’t appeal to them with the pain you’ve suffered. bringing up your own pain endlessly is emotionally fraught work 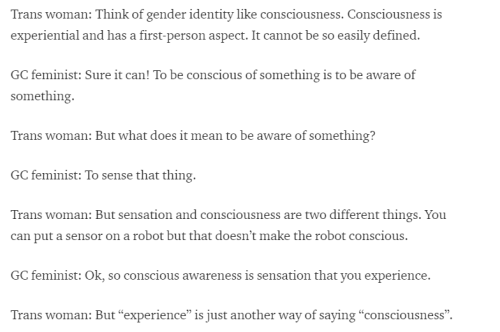 no no no vlad, he is correct. gender identity is pain

And then there is this:

people are so concerned about terf dogwhistles, but trust me that when I say “men oppress women,” I am saying it in the clearest and most uncomplicated terms as possible. y’all the ones dressing up meanings of words and making up your own languages.

“The cliché that when women are liberated men will be liberated too shamelessly slides over the raw reality of male domination — as if this were an arrangement in fact arranged by nobody, which suits nobody, which works to nobody’s advantage. In fact, the very opposite is true. The domination of men over women is to the advantage of men; the liberation of women will be at the expense of male privilege. Perhaps afterwards, in some happy sense, men will be liberated too — liberated from the tiresome obligation to be ‘masculine.’ But allowing oppressors to lay down their psychological burdens is quite another, secondary sense of liberation. The first priority is to liberate the oppressed. Never before in history have the claims of oppressed and oppressors turned out to be, on inspection, quite harmonious. It will not be true this time either.”

Here is an odd bit that seems to undercut the reality that some women do not like having sex with men, yet it is linked to from lesbian blogs:

Oxytocin and vasopressin in semen – disseminated into the female bloodstream – are intensely powerful bonding drugs. Most males are exposed to substantially less oxytocin than females, though males do manufacture it for the purpose of injecting it into females. Yet scientists, and by extension, the media, continuously refer to oxytocin and vassopressin as “pair-bonding” drugs. As seminal chemicals, what oxytocin and vassopressin actually do is bond a woman to her seminator. – Whenever a male ejaculates into a female, his sem-chems work to secure her allegiance. Oxytocin is also released in females upon orgasm, and so for females who orgasm with seminator, bonding with dude is exacerbated. (Heterosexual women get drugged, then think the woozies, shit, be LUV. (That’s right: all those “nice” feelings from sex are just the release of chemicals)).