This is a good question, and I think the correct answer is “Don’t waste time on dating apps”:

Your general advice about the pursuit of love always resonates: Build a life alone that you love; hold onto your belief that love exists even when it makes you feel vulnerable and uncool; if you meet someone you think you like but they’re tepid or not fully invested, go ahead and tell them to fuck off. I now read this and think, “Yep, got it, great advice, duly noted.” My execution is sometimes imperfect, but I remain fully convinced that you are right about these things. However, that belief doesn’t change the day-to-day, grueling nature of what “being open to love” in 2019 entails.

…I know that, as a reasonable, open, attractive woman, if I keep trying, I’ll find someone eventually. Romantic notions aside, statistically, something eventually has to work out. But what if that means, say, another 62 first dates over the course of five years? All that swiping, all those tequila-sodas, all that very precious time. And out of those 62 men, I’ll feel a genuine connection to maybe four who won’t work out, and maybe No. 63 will be IT. (I work with data in my professional life, can you tell?) And by IT I simply mean someone who inspires me to get off the dating apps for a significant amount of time. Okay, great. But will all that time lost on all those men really have been worth it? Despite societal pressure and the excitement of those few close calls, I remain unconvinced.

…So that’s the crux of it. If I find the process so grueling, why should I do it? My life as a single person is already pretty great, so what if I spent all that date time going on long walks with my dog? Getting really, really fit (the only thing standing between me and a Megan Rapinoe bod is MEN)? Reading books? Making veggie lasagna with my friend, her husband, and their 3-year-old? Isn’t that a better use of time than drinking at a dark bar with a man I’m most likely to find boring and unexciting? Why do I have to keep on spending my time this way? Can’t I just lean into my life of being single and abandon the pursuit of a partnered life?

Suppose you have 4 hours that you’re going to invest in your social life, and two options, both of which might allow you to meet a romantic partner, but one method can lead to a complete waste of 4 hours, and the other is guaranteed to be fun, even if you don’t meet someone, which option should you chose? It’s obvious, right?

I’ve done lots of stupid things in my life, but I occasionally do something very smart, and the smartest of the smart was probably the decision to start hosting a party once a month. I’ve been doing this for two years now. It was initially an informal sit down dinner: 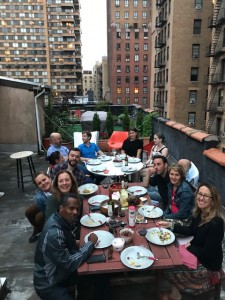 Now it is even more informal: 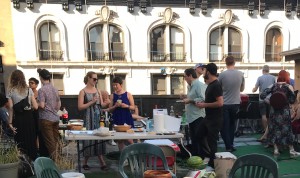 Everyone I invite tends to bring a friend, so the parties have allowed me to dramatically expanded my social circle in New York. In the early days I’d invite 40 people and 10 to 12 would show up. The most recent party, I invited 80 people and 27 showed up. The parties are huge fun, and I meet people. Do you think I would ever waste time on a dating app? Why would I do that when I can simply put my energy into making sure the next party is the best ever?

Again, if you have 4 hours that you’re going to invest in your social life, and two different options, both of which might allow you to meet a romantic partner, but one method can lead to a complete waste of 4 hours, and the other is guaranteed to be fun, even if you don’t meet someone, which option should you chose?

Not only is this idea good for you, but it’s also good for society. If more people took on leadership roles as social organizers then there would be less loneliness in the world.

I’m not sure why dinner parties have faded but they clearly have. My parents raised 4 kids, and they were also very social, hosting dinner parties all the time. Back then, dinner parties were very normal, even for couples that had children. Nowadays, having kids means you retire to the suburbs and live in isolation, exhausted, supposedly without time to organize a party, and single people in the city, for reasons that I don’t understand, don’t organize parties much. In certain cities, the argument is that the apartments are too small to have parties at home, but eating out in the park would still be easy to organize in nice weather.

I know of a few individuals who do this, but it is surprisingly rare. The cost versus rewards ratio favors doing it, but people don’t.

All the same, going back to the woman who wrote the question above, it is worth emphasizing that people can live amazing lives without a romantic partner — there is a freedom in not having a romantic partner. For thousands of years it was taken for granted that long periods of isolation were a natural part of life, and such eras helped make people stronger. One can focus on one’s art, on one’s writing, on one’s politics, on everything that matters to oneself. That isn’t fully possible when one has a partner. Even the most perfect partner will have needs different from oneself, and unless one is the worst kind of narcissist, one will focus on the needs of one’s partner, once one has a partner. And that means putting one’s own work and one’s own ambitions on the back burner, for at least some of the time.

There is a beauty to the hours that we spend alone that can not be matched by the hours we spend with others.