This woman is a mess. For 30 years she’s been pushing the idea that we should accept what the right-wing says, at face value, and try to give into their demands, in the hopes that if we give the right-wing what they want, then they won’t be so angry anymore. It’s difficult to understand how she can continue to make the same mistake, over and over and over again. 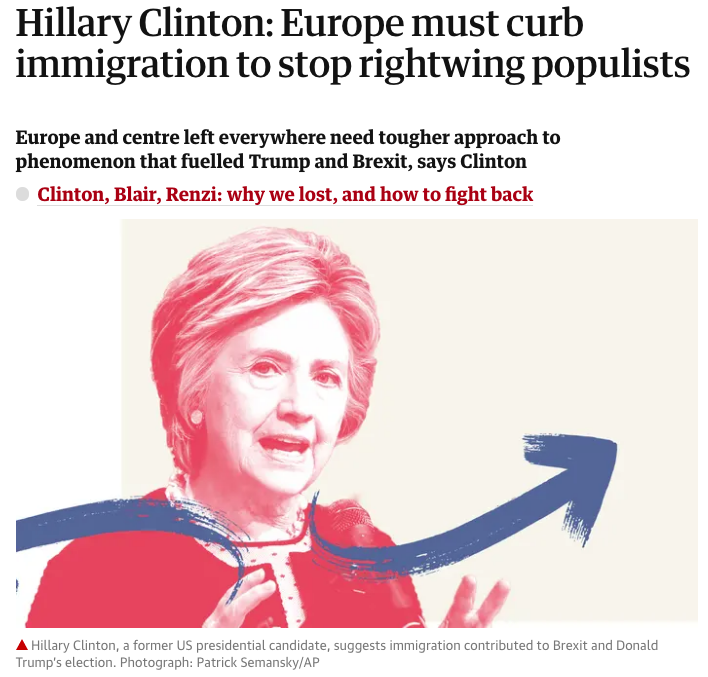 Except immigration is not stirring up right-wing populist fury, rather, right-wing populist fury uses issues such as immigration to try to motivate those parts of the public that can be frightened. Does anyone think that Donald Trump can be mollified by action on immigration? Or can we agree that Trump uses myths about dangerous criminal immigrants to motivate a part of his base? If the USA passed a law banning all immigration, would Trump say “Okay, now that my side got what we want, we are ready to compromise and give the Democrats something they want.”

Obviously, the opposite is true: every time the alt-right gains a victory, it becomes stronger. If immigration was banned, the alt-right would grow stronger, and they would move on to other topics. Indeed, one reason the alt-right has gained strength over the last 25 years is because people like Clinton kept advocating that we give them victories.

How can Clinton not get this? It is remarkable that she still has a blind spot on this issue.

And it is disappointing that she won’t fight for immigration on purely moral grounds. As others have said, it often seems like she has no moral center, rather, she shifts her positions towards whatever she thinks might be popular.