People are increasingly miserable in adulthood. Presumably this is partly the stress of raising children? It would be interesting to see the chart of people who do not want, and don’t have, children. 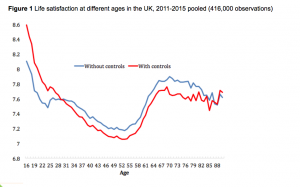 Overall, we think there is a great deal of evidence – though we have critics, especially among a small group of social psychologists – that humans experience a midlife psychological ‘low’. The midlife decline in wellbeing is apparently substantial and not minor (see the notes below each figure, which compare to the coefficients on major life events). It should perhaps be emphasised that the midlife low is not affected by regression-equation controls for having young children, nor by changing the exact nature of the dependent variable.

Our view is that these kinds of plots of happiness and life satisfaction should be shown – admittedly with a discussion of appropriate caveats – to all young psychologists and economists and medical scientists and biologists and others. The phenomenon seems an important and fundamental one. It is currently a puzzle. Realistically, nobody in the world understands why these intriguing U-shapes are found in modern data. Ignoring the existence of this apparently deep-rooted pattern, however, is presumably not helpful or scientifically sensible.