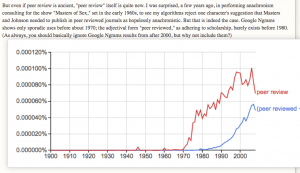 Of course the thing may exist before the word: but one thing I’ve found invariably in looking at these etymologies is words usually do not march straight out of the primordial ooze into widespread use for no reason at all, particularly words describing so specific and unpoetic as a practice like this. Usually there is some reason, some new thing in the world that requires a new term to distinguish it from what has come before.

So what new thing gave rise to peer review? Reading through the texts gives some sense. JStor contains no uses of the phrase until 1965, in reference to “peer review groups” at the NIH. Through the late 1960s the phrase was only used in the context of doctors supervising medical care of other doctors. The first use outside of medicine I find is in 1969, in a library sciences context,1 also about professional self-evaluation. An early usage for grants is in 1970.2 The first usage of the phrase in the American Historical Review is in 1978, in a decidedly negative evaluation of the “peer review bureaucracies of foundations and government,” “manned by scientists of lesser achievement.”

So what is the new thing being described here? As best as I can tell, the reason for its existence is the rise of the new government funding bureaucracy in the 1960s; the NIH, the NSF, and their smaller cousins like the NEH all needed mechanisms to distribute their new government largess: and peer review was a way to ensure that government money was not handed out by the government, but by experts from the scientific community. (This story, by the way, bears an interesting relationship to the one I wrote earlier this month about government attributes versus public ones; that sentence would have a different valence if I said that scholars wished to ensure the “public money was not handed out by the public.”) Its use in non-publication situations–peer review boards investigating medical malpractice, for example–is almost entirely about protecting professional organizations from state or other bureaucratic interference. And when there are large-scale discussions of peer review in science–as in a special 1985 edition of “Science, Technology, and Human values,” they frequently take grant-making as the archetypal form, not the refereeing of scholarship.

The central technology that causes this new term to spread to scholarship, then, is the grantmaking state. But this relies on a more prosaic technology, as well. Peer review is the archetypal form of scholarly organization in the age of the xerox machine. Without it, a sheaf of grant proposal could not be easily snapped into a binder, mailed across the country, and then (perhaps) flown back to Washington with its expert reader for discussion.