The decline of the birth rate

Lyman Stone says the birth rate is declining, and this is a bad thing. Stone doesn’t say why this is a bad thing, but a follow-up post is promised. There are comparisons to many other countries, many of which have a good standard of living (Sweden, Japan). It is tough to see what the problem is. In terms of economics or total population, every affluent country has the option to simply allow in more immigrants, which can fix most of the economic problems that are associated with a falling population.

In most cases, when the birth rate declines rapidly, it is because the economy is in some kind of trouble. There are a few exceptions, which can be explained by looking at the wages of the young. Since birth is age dependent, and typically requires a few years of preparation, the overall economy does not matter; all that matters is how the economy is treating people in their teens and twenties. This sometimes means that the birth rate falls even when the nominal economy is booming. The 1960s are a good example. In the USA the birthrate fell from 1958 to 1976, but the overall economy seemed strong from 1960 to 1973. But during those years automation of agriculture and automation of industry caused the loss of a lot of good paying, low-skill jobs that would have previously allowed a 20 year old man to marry his girlfriend and have a child. So “the economy” doesn’t matter, only the economy for young adults. And when the economy is terrible for some group, the government is certainly justified in offering programs that help that group.

But if the economy is strong for young people, and they still don’t want to have children? I don’t see that as being a problem.

Stone offers this chart of the USA birthrate: 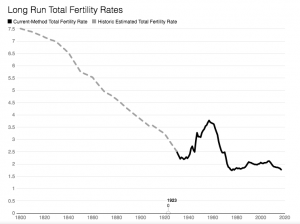 What do you notice?

What I notice: the only big surge upwards is the era when incomes in the USA were dramatically compressed, the so-called Great Compression. That seems to indicate that some people want to have big families, but they are held back by economic factors. In that case, we should fight to compress incomes, so that the young will have more resources to have children. But then, fighting for a compression of incomes is what progressives do anyway, so basically, the only advice to draw from this is that we should all keep fighting for progressive goals.