We have learned something crucial about how humans learn

The biggest disappointment regarding the Internet is surely that there has been no increase in the rate of discoveries. If you’d asked me in the 1980s, I would have guessed that a world wide network of information would increase the speed of scientific breakthroughs. I would still have said the same thing in the late 1990s.

From the point of view of intellectuals, the Internet seems like Utopia: so much information!

How could such an incredible resource fail to help the economy?

And yet, by 2016, the failure was clear. The Great Stagnation (typically dated to 1973, though possibly it started earlier) continues to grow worse. Investment continues it’s 50 year decline: 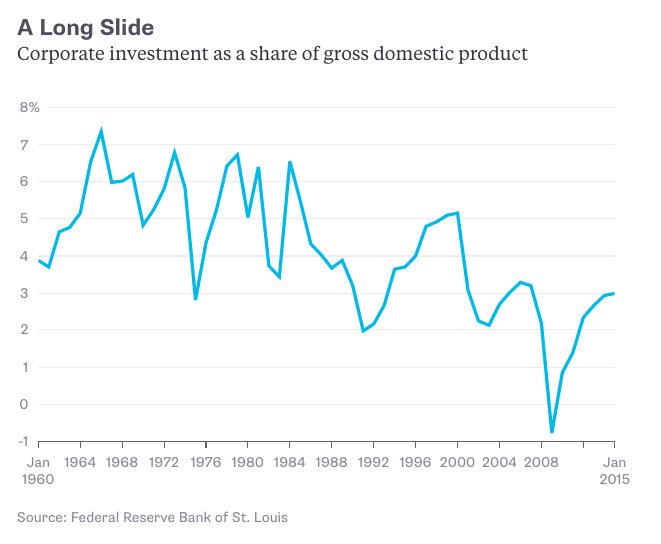 Compare the current stagnation to the incredible stretch from 1861 (first publication of Maxwell’s equations) and 1914. As Peter Drucker has said, those were the 53 most innovative years in human history, with a major new industry being created, on average, every 18 months (the telephone, the electric motor, the combustion engine, the modern chemical industry, aspirin and the modern pharmacological industry, etc).

So apparently having unlimited access to nearly all human knowledge does nothing to lift the economy, and does not speed up the process of discovery.

I doubt anyone would have guessed this before we had seen it with our own eyes.