What can we expect from Alexandria Ocasio-Cortez?

I donated $400 to the campaign of Alexandria Ocasio-Cortez. That is the most that I have ever donated to any political campaign. What can we expect from her, while she is in Congress? During the next 2 years, I suspect the answer is “nothing.” The Democrats don’t have much power. And she faces at least two great difficulties:

1.) governing is a complex skill which takes 10 years to learn and she is a complete novice

2.) soon she will have to start thinking about her next election.

Mind you, these are not criticisms of Alexandria Ocasio-Cortez. These are criticisms of the type of republics that have become common in the West since the 1700s, and more so since 1945. It seems obvious to me that if we want good government, then the leadership needs to be elected for much longer terms, so they can actually be effective. If you assume that it is difficult to get anything done during one’s first 10 years, because it takes that long to learn how things work, then leaders should be elected for at least 17 years, so they can have a few years where they can actually be effective. Longer terms would also allow them to focus on their job, which is leadership, rather than having to worry about re-election.

But there is at least one way that Alexandria Ocasio-Cortez can have an immediate impact, and that is simply by existing. The reaction she is sparking from conservatives implies that her role as a symbol is something that terrifies them. She might not get much legislation passed in the next two years, but she can exist, and every minute she is in Congress, existing, she raises the specter that some day there might be more like her in Congress, an idea that seems to invoke primordial fear in right-wingers.

Vox has this bit:

On Thursday, Eddie Scarry, a media writer at the conservative Washington Examiner, tweeted a photo of the representative-elect walking down a hallway. “Hill staffer sent me this pic of Ocasio-Cortez they took just now,” Scarry wrote in the tweet, which has since been deleted. “I’ll tell you something: that jacket and coat don’t look like a girl who struggles.”

“I’m an educator, an organizer, a working-class New Yorker,” she said in her first campaign ad, where she also highlighted her Bronx upbringing and time spent working as a bartender. “It’s time for one of us.”

Scarry’s tweet quickly sparked backlash, with most people criticizing him for implying that people who “struggle” can’t wear jackets or coats. (There’s also no way of knowing how much that particular jacket or coat cost, or where Ocasio-Cortez purchased her outfit.)

I’m left wondering if Eddie Scarry has ever had a female friend? If he is straight, has he ever dated a woman? Because I’ve definitely known women who managed to put together great outfits even when they were poor. And I’ve seen fairly cheap dresses from Zara that look like they were from an expensive store. One has to be desperate to generate some criticism of a woman to suggest that because she is working class she can not find the money for a nice suit. Even in very poor African American and Hispanic families, they usually scrape together enough money so they can dress well when they go to church on Sunday. “If she was really working class then she would not have a nice outfit” is an idiot thing to suggest. 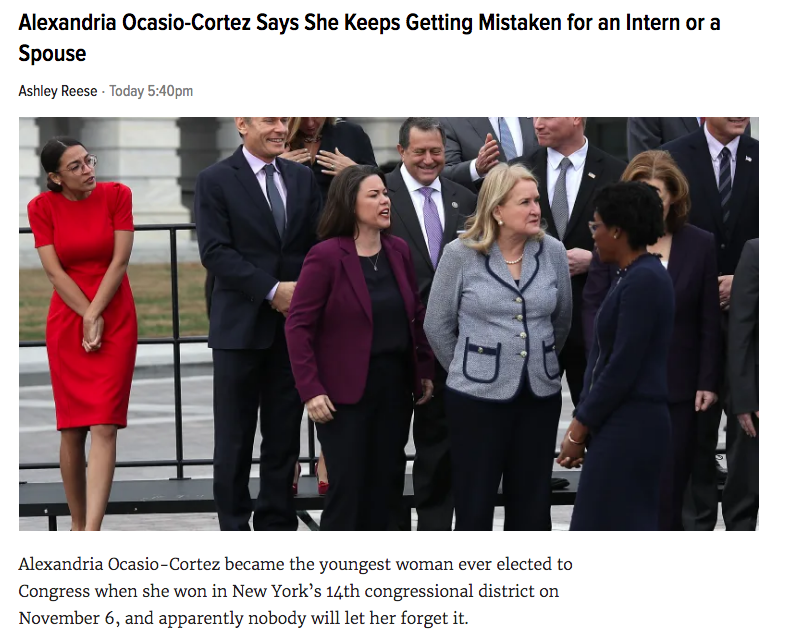