Why does he want to throw his reputation away? 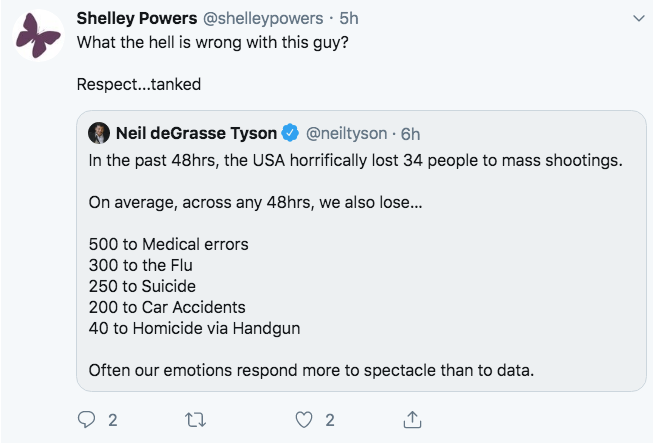 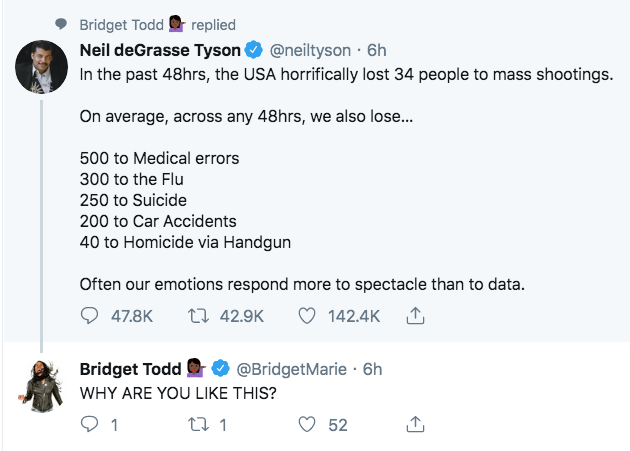 From lawrence on How I recovered from Lyme Disease: I fasted for two weeks, no food, just water

"In my experience, yes. I have made it common to do a 3 day fast a few times a year. Anecdotally, I would say i..."

From Tes on How I recovered from Lyme Disease: I fasted for two weeks, no food, just water

"Thank you so much for sharing your story. I have recently been diagnosed with Lyme disease and want to treat i..."

From Gábor Hidvégi on What does PHP offer now?

"Good article. However I hate to see so called "SOLID Principles" conflated with OOD. SOLID is a form of cargo ..."

"The first time I looked closely at OOP I was astonished at the – idiocy, the absence of any usefulness, the ad..."

“Mass shootings are just not enough of a problem to be worth the attention given to it”, is in fact an important message that more people need to hear.

If nothing else, it would drain a lot of the appeal of committing one. Nobody would be posting manifestos for crimes most people would only find out from end of year Department of Health statistics.

Oh yeah that argument. If you don’t get it there is something wrong with you. Yeah right. I’ll tell you what’s wrong here. You making a fuss about an observation. YOU are the one that is aggravated by it becuase you assume bad intention. How can you determine that from what he says? You can’t. And maybe you should not. Maybe you should use your energy to make it possible that that beloved country of yours institutes a 100% gun ban. Before it gets shot to hell.

ruurd, I’m not sure if you’re responding to me or to DangerNorm, but this is true:

“If you don’t get it there is something wrong with you.”

Seriously, if I need to explain why we distinguish between murder and flu then there is definitely something wrong.

I don’t know Neil deGrasse Tyson personally so I have no reason to extend him goodwill, other than what he writes in public, and what he’s here written in public does not reflect well on him. To compare murder to the flu undermines the moral weight that we normally assign to murder.

“How can you determine that from what he says?”

One technique, that works very well, is to read what he has written.

It is true that a murderer is different from the flu virus in that murderers are moral agents and the flu virus is not, and this obviously has policy implications

However, a person who dies from murder and a person who dies from the flu are both still dead. I’d say it is the critics of Dr. Tyson who are trivializing deaths here. “Oh, 300 died of the flu? Pfft, who cares? A death from flue is not even 1/100th as tragic as a death by violence. Oh, 40 other people also died from being shot in different incidents? Pfft, who cares? They all died in different places, so the tragedy is more diluted, and therefore less important.”

DangerNorm, thank you for writing. I think you are missing the moral element here. You should understand the distinction between death and immoral conduct. If we view the deaths alone, separate from the process by which people died, then clearly, no one is saying that death by flu is less sad than death by gun fire.

However, most death is a private affair. Those affected include the family and loved ones, the dear friends of a lifetime. But no one else. The nation does not typically mourn when an ordinary citizen dies of cancer or a heart attack or the flu. There are no great moral questions that attach to those deaths.

Mass murder is different. It is a moral matter and therefore raises important social questions:

Are we doing enough to treat mental illness?

Are we doing enough to limit the use of guns?

Are we doing enough to combat radicalization?

Are we teaching people to respect other people?

Are we doing enough to support one another?

These questions do not commonly come up when an ordinary citizen dies of cancer or a heart attack or the flu. There are a few exceptions, for instance, if someone complained to their family that they had chest pain, but the avoided going to the hospital because they lacked health insurance, then their death again raises the question of whether we are doing enough to help one another. And over the long-term, there is the important moral issue of whether we are spending enough on research to find cures. But outside of such cases, the death of an ordinary citizen, from natural causes, raises no urgent moral issues.

People were upset with Neil deGrasse Tyson because he seemed to ignore the moral dimension of these deaths. He deserves to be called out for that.

Your description of most people’s response is correct, but I consider it to be a problem, rather than the correct response. Responding to tragedies without a sense of proportion can lead to very misguided policy proposals that waste resources and have no sense of trade-offs.

To give a specific example that always comes up when this happens, people always propose making life harder on the mentally ill by striping them of more rights and making it much easier to confine them without charge or trial. Some would object to this on principle, of course, but even just at the level of whether it would save more tragedy than it would cause cannot be meaningfully addressed if you give far greater consideration and weight to loud and concentrated tragedy of mass shootings, than to the quite and distributed tragedy of involuntary institutionalization.

This is tangential to the above point, but on the subject of mental health, I’ll also take this chance to say that I’ve been told by at least 2 separate people that they would like to seek help for mental issues, but are unwilling to accept the risks associated with having a mental health history.

DangerNorm, as to your last point, I was recently consulting with a startup that focused on the privacy of medical records, and I agree it is an area where stricter rules are necessary.

I agree also that the rules regarding involuntary institutionalization need to be stricter, and the defense of due process in such cases can be made much stronger. I’m sure we’ve all heard some stories of people’s due process being violated when there are questions about that persons mental health.

“Responding to tragedies without a sense of proportion can lead to very misguided policy proposals that waste resources and have no sense of trade-offs.”

More people die of cancer than die of homicide and the difference is one of orders of magnitude, yet we spend more on police than on cancer research. Is that a waste of resources? Possibly, but the argument is subtle. People can spend their leisure time and money on many things, such as reading a book or playing a video game or skiing or scuba diving or knitting or going to a restaurant or any of a thousand other activities, all of them very fine and reasonable, yet the moment that person gets cancer they will wish that they had donated more money to cancer research, and they will wish that all of society had been more focused on the issue in recent decades. But it is subtle argument because it is one of degree. The government does put some money toward cancer research and we can’t possibly put 100% of the GDP toward cancer research, so the whole question becomes one of whether we are spending the right amount, or maybe we should be spending 20% more, or 5% less, or some small adjustment to current sums.

But a man walking down the street with an assault rifle, picking off people one by one? It’s the kind of urgent crisis that needs an immediate response. The potential damage, if no one stops that person, is unbounded. So we end up spending more on police than on cancer research. At the margin, it might be rational to make some small adjustment, to spend 1% or 2% less on the police and a bit more on cancer research, but overall, that the short-term emergency demands an overwhelming response that the long-term emergency does not, seems to be roughly correct.