Here is an odd article from the Russian press. It seems to be saying that Western feminism is wrong because women are actually very tough:

There’s a railroad in Siberia that my grandmother and other Soviet women built. Married twice and twice divorced, she was always so busy at work that she didn’t have time for her own children. At the age of 17, her daughter, my mother, moved from a small city in the north and went to Russia’s capital to enroll at Moscow State University.

Strangely enough, even though a philosophy major she also ended up building something. In Soviet times students were considered free labor, and in summer they often had to work in the potato fields or on construction sites. There is a toilet in the Murmansk airport that my mother is particularly proud of. She helped build it, and she hasn’t stopped since. 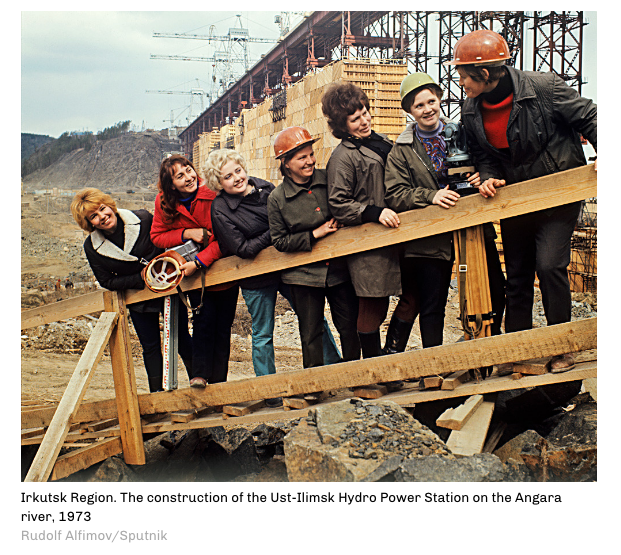 But surely that is an argument for feminism? If women are tough, why get in their way? Why put up roadblocks to slow women down?

Also, this bit is curious. Should management be invited to a meeting of a labor union? The workers will eventually have to negotiate with management, but shouldn’t the workers first figure out what their demands are? Likewise, women spend all day, every day, negotiating with men, but shouldn’t women occasionally meet to figure out their demands, to clarify what they might demand, as a group, from society? This part is confusing:

I later talked to a few of these female professionals: they have balls of steel under their skirts. It’s not that easy to be in tech, where women account for just 35 percent of bachelor degree recipients in STEM. Female tech startup founders raise less money, about 15 percent of all seed funding.

Women in the U.S. do a lot to support and encourage each other. They probably know more about solidarity than women anywhere else in the world. There are plenty of women-only dinners, women-only educational programs, and female-oriented accelerators in the country. But these artificial institutions exclude those who should be the main participants in a debate on female freedom – men.

It’s precisely men who have to learn how to deal with female bosses, colleagues, subordinates, and most importantly, their own daughters. Men around the globe have to accept women as leaders in tech, finance and other industries; not just on paper, but really in their hearts and minds.

Also, for an article that suggests that Russian women don’t need Western feminism, this next part sounds like a demand for more feminism:

She divorced my father when she was pregnant because “he just didn’t make any sense,” and unlike many women who are afraid of loneliness or poverty, she knew that she could do this all by herself. She learned this from my grandmother, and I learned this from her. I just don’t want to.

…[The women] went to factories and research labs every day because there was no such thing as remote online work that could be done from the comfort of their homes. But the fact that you had a job didn’t mean that society forgot traditional gender roles. After work, they still had to cook dinner, clean the apartment, take care of the children, etc.

Soviet women didn’t have washing machines or vacuum cleaners, and so they were constantly tired and stressed. Where were their husbands in the evenings? Different families had different approaches, but most men were on the couch, with a sports magazine in one hand and a beer in the other.

Okay, so the men are on the couch drinking beer and watching sports, while the women take care of the house. That sounds like a standard feminist complaint about women being forced to work “second shift” once they get home. How does this refute the need for feminism in Russia? It reads like a feminist manifesto.