AWS does not protect you from devops

Nowadays, the clients I interact with say things like “We want to use AWS because then we won’t have to spend so much money on devops.” This is a victory for Amazon’s marketing. The reality is that Amazon offers a graphic interface for configuring complex systems, but you still need to understand the complex systems. Amazon is not actually hiding the complexity from you, Amazon simply makes it a little prettier.

I wrote about this a year ago in AWS is inappropriate for small startups because its complexity demands a specialist.

That post sparked some interesting conversations on Hacker News.

I’ll expand upon the point here, based on work I’ve been doing this week.

It took me days to track down the AWS documentation that explains why I was seeing this error.

So I reconfigured the ElasticSearch cluster: 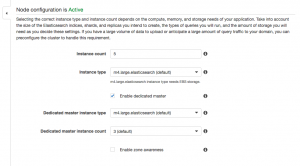 And I set up a bunch of dashboards and alerts to let me know when something goes wrong with this cluster: 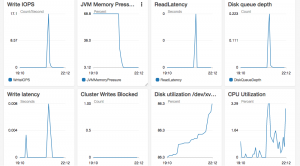 The expensive thing about devops is that you need to learn a lot about configuration. That takes time. Time is expensive. And when I use AWS, I still need to learn a lot about configuration. For example, how many instances, of what size, do I need to use before I stop getting JVM OutOfMemoryError errors? The only way I can find out is trial and error. Amazon is not helping in any way here. I’m still spending time on devops tasks.

Among my frustrations, Amazon does not emphasize the errors that I was seeing. Check out the Troubleshooting page: 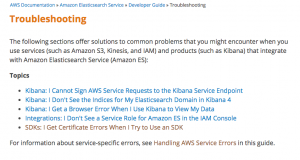 I would guess that there are more developers who have made my mistake than who have been tripped up by Kibana. Writing too much information too quickly and getting SocketTimeouts and OutOfMemory errors is probably a common mistake, especially since one or two million small JSON documents really should not be a lot for AWS. There are surely a few developers out there who started their projects with the naive belief that a default AWS cluster would be enough for a fairly minor task?

More so, Amazon does put some interesting obstacles in my way which would not exist if I was working with raw hardware. For instance, I have long known that Amazon has a load balancing service, for websites, and that load balancing service dislikes sharp spikes — its much better at gradual changes in volume, rather than sharp changes. I wouldn’t have thought they would use the same balancing in front of its ElasticSearch servers, but that does seem to be true — when my app first starts writing to ElasticSearch, the app faces frequent disconnects and so I see SocketTimeout errors in the logs, but after 3 or 4 minutes the app can write about 15,000 documents a minute. And this implies that they are load balancing:

There might be reasons to use AWS, but please don’t use it because you think it’s going to save you a money that you would otherwise waste on devops. If you use AWS, your contractors will still end up doing a great deal of devops.