What strikes me is how carefully they’ve thought about the problems with Ethereum, and other blockchain technologies. They deliberately make sure that Pact is NOT Turing complete, so they can avoid some of the hacks that took place with Ethereum. They emphasize a declarative style. And yet they also make it so the contracts can be fairly upgraded.

This is from the article:

However, the added versatility offered by Solidity smart contracts comes at a great cost in safety and complexity, jeopardizing the security and reliability seen in Bitcoin. Some pressing issues faced by Ethereum’s Turing complete smart contracts include:

An explosion of attack vectors: the EVM’s general purpose nature and complexity mean that hackers can find malicious openings to attack and capitalize on smart contract bugs and vulnerabilities. These vulnerabilities have occurred or been exploited in the past resulting in the loss of hundreds of millions of dollars, as seen in the DAO hack, Parity Wallet multisig bug, and other high profile smart contract failures.

Impenetrable bytecode on chain: Because Solidity compiles down to the EVM’s lower-level bytecode language, it is no longer able to be read or inspected by humans, resulting in no reliable means for users to verify the code that is actually executed on the blockchain.

Furthermore, Ethereum smart contracts face great difficulties when it comes to extracting data out of smart contracts and general usability of the system. In order for smart contracts to achieve widespread adoption, data held in smart contracts will need to be able to interact and integrate with existing database systems and be significantly easier to read, write, and understand.

And they’ve also solved the bandwidth problems that technologies like Bitcoin were facing. Amazing stuff.

I knew nothing about these people, at all, I’d never even heard of them, till Sunday, when the CEO came to a party I was having at my place in NYC. But then I got interested, so I’ve been reading their blog posts. The more I read about them the more I think this might be the startup that’s come up with the answers to some of the problems that other blockchain technologies were facing.

Also, as someone who loves the Clojure programming language, I love that they went with a Lisp syntax for Pact: 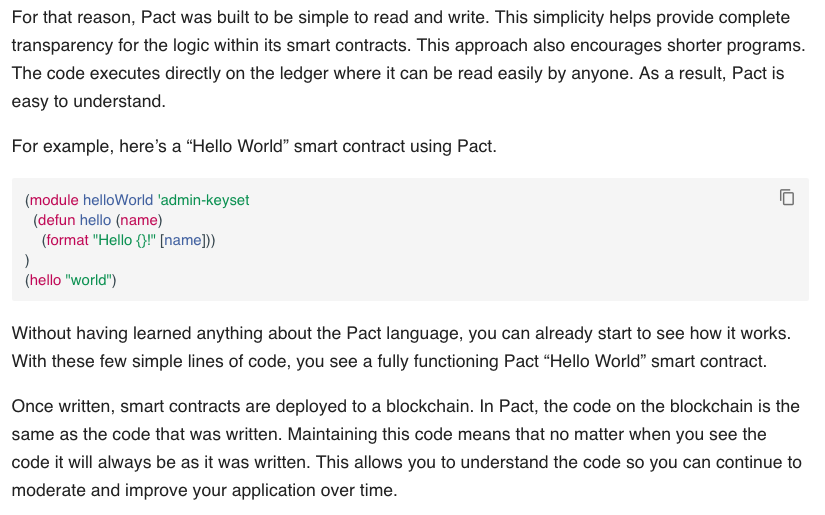