I missed this at the time. Interesting:

Another counterargument is “But we need feature X!” Everybody will have a favourite upcoming feature that would be hit by the moratorium — mine is offline capabilities. But an extra round of defending the need for feature X without any reference to native apps sounds like a good idea to me.

The final counterargument is IE6. Web development was seriously hampered in the five years that Microsoft refused to upgrade its browser. New features were pushed into the other browsers, but not into IE.

Still, did this lack of new features also mean lack of innovation? Not really. As James Edwards puts it:

Limitation spurs creativity, I remember that period quite fondly.

Being forced to work around IE6’s issues required quite a bit of creativity, and although not every solution stood the test of time (most libraries and frameworks from that era, for instance), it still made the creative juices flow.

Besides, the IE6 era forced us to think about what we web developers really wanted. We had to define and defend every single feature we requested (see for instance this old post about IE7 and JavaScript) and set priorities.

It would be good to return to that creative mindset for a while. Not for five years — that’s clearly too long — but a break of about a year or so sounds great. 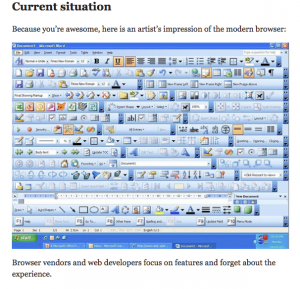