This is a bit of speculation on my part. I wrote previously about using small apps to build big web sites. I want to re-emphasize the Big Ideas from that article:

2.) small apps are easy to maintain

3.) an architecture of small apps might leave you with a lot of apps, which need to be managed, but managing them becomes a management issue, rather than a technical issue. Technically, the app is easy to maintain because it is small.

4.) small apps are easier for new developers to learn

5.) at some size, all companies should expect specialization among the programming team — that specialization is made more difficult when all functionality is handled by one app.

Here is my bit of speculation: I suspect these ideas will become even more important as we move into an era of robots. If there comes a day when we live in houses where all chores are handled by robots, the robots will be run by “small apps”. By that I mean simply that they will be highly specialized. We will never have a robot that recreates the functionality of a human. We will never have this: 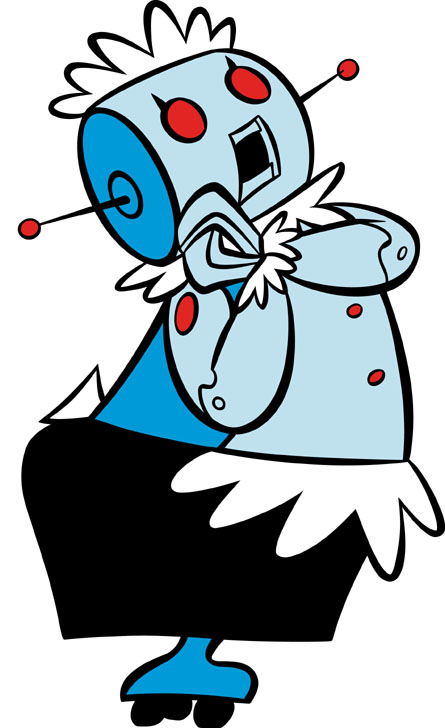 Instead, we will get a lot of robots that have highly specialized tasks. The first robots I expect to see in households are those robots that simply extend the functionality of those household goods which appeared 100 years ago and brought the first wave of labor-saving devices into the house. The new robots would therefore be:

2.) clothes driers that iron and fold your clothes

3.) dishwashing machines that are connected to cabinets and which put all of your dishes away for you

4.) cabinets with robot arms that fetch dishes for you — this would enable the use of the upper cabinet shelves by people who are short (like my mom).