Women as the original software developers 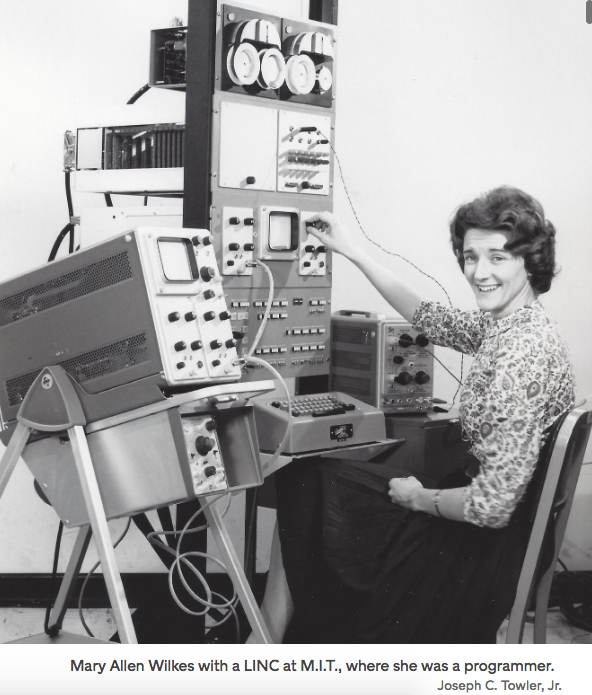 Often enough, Wilkes’s code didn’t produce the result she wanted. So she had to pore over her lines of code, trying to deduce her mistake, stepping through each line in her head and envisioning how the machine would execute it — turning her mind, as it were, into the computer. Then she would rewrite the program. The capacity of most computers at the time was quite limited; the IBM 704 could handle only about 4,000 “words” of code in its memory. A good programmer was concise and elegant and never wasted a word. They were poets of bits. “It was like working logic puzzles — big, complicated logic puzzles,” Wilkes says. “I still have a very picky, precise mind, to a fault. I notice pictures that are crooked on the wall.”

What sort of person possesses that kind of mentality? Back then, it was assumed to be women. They had already played a foundational role in the prehistory of computing: During World War II, women operated some of the first computational machines used for code-breaking at Bletchley Park in Britain. In the United States, by 1960, according to government statistics, more than one in four programmers were women. At M.I.T.’s Lincoln Labs in the 1960s, where Wilkes worked, she recalls that most of those the government categorized as “career programmers” were female. It wasn’t high-status work — yet.

In 1961, Wilkes was assigned to a prominent new project, the creation of the LINC. As one of the world’s first interactive personal computers, it would be a breakthrough device that could fit in a single office or lab. It would even have its own keyboard and screen, so it could be programmed more quickly, without awkward punch cards or printouts. The designers, who knew they could make the hardware, needed Wilkes to help write the software that would let a user control the computer in real time.

For two and a half years, she and a team toiled away at flow charts, pondering how the circuitry functioned, how to let people communicate with it. “We worked all these crazy hours; we ate all kinds of terrible food,” she says. There was sexism, yes, especially in the disparity between how men and women were paid and promoted, but Wilkes enjoyed the relative comity that existed among the men and women at Lincoln Labs, the sense of being among intellectual peers. “We were a bunch of nerds,” Wilkes says dryly. “We were a bunch of geeks. We dressed like geeks. I was completely accepted by the men in my group.” When they got an early prototype of the LINC working, it solved a fiendish data-processing problem for a biologist, who was so excited that he danced a happy jig around the machine.

In late 1964, after Wilkes returned from traveling around the world for a year, she was asked to finish writing the LINC’s operating system. But the lab had been relocated to St. Louis, and she had no desire to move there. Instead, a LINC was shipped to her parents’ house in Baltimore. Looming in the front hall near the foot of the stairs, a tall cabinet of whirring magnetic tapes across from a refrigerator-size box full of circuitry, it was an early glimpse of a sci-fi future: Wilkes was one of the first people on the planet to have a personal computer in her home. (Her father, an Episcopal clergyman, was thrilled. “He bragged about it,” she says. “He would tell anybody who would listen, ‘I bet you don’t have a computer in your living room.’ ”) Before long, LINC users around the world were using her code to program medical analyses and even create a chatbot that interviewed patients about their symptoms.